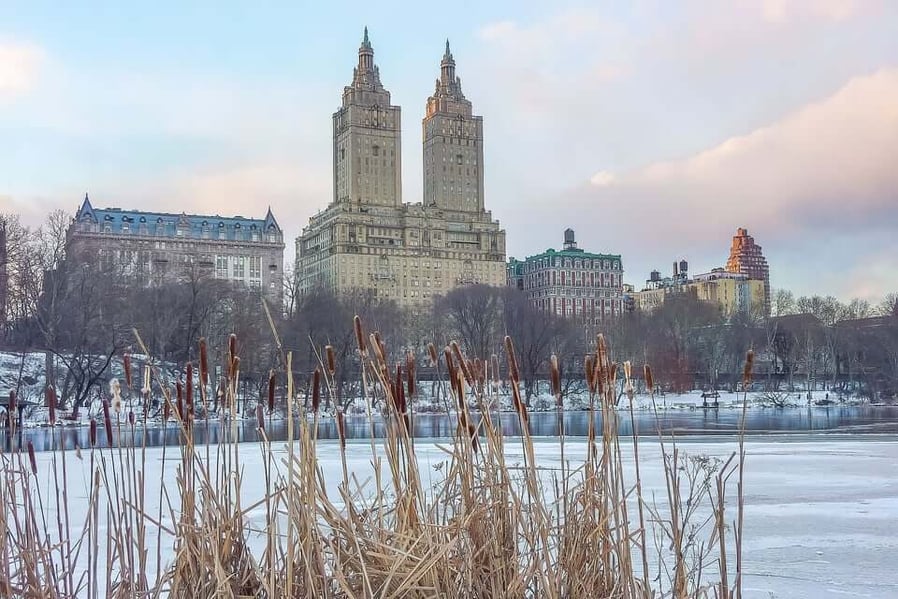 Things to do on the Upper West Side in Winter

The affluent and residential Upper West Side is one of New York City’s cultural hubs, with an extensive history dating back to the 1600s. The area has come a long way since it was first named ‘Bloomingdale’ by Dutch settlers, as has the rest of the city.

There is no shortage of things to do in this vibrant neighborhood. From cozy indoor activities to wintery outdoor fun, everyone will find something that suits their interests.

However, since the city has so much to offer, it’s easy to feel overwhelmed by all the available options. To make things easier, we've created a guide that breaks down the best things to do on New York City’s Upper West Side between January and March. Keep reading to discover more.

Things to Do in January

January may be the coldest month on average in New York City, but the weather is worth the holiday cheer that remains throughout the area, in the form of extravagant window displays, winter villages, and decked out rooftops.

There are also plenty of indoor activities to enjoy, from viewing museum exhibits to shopping to seeing a show.

Bagels are a New York City essential, so make sure to stop by Absolute Bagels at some point. This beloved neighborhood institution, located at 2788 Broadway, has been serving up fresh, handmade bagels to locals and visitors alike for over 25 years.

When you walk into this subtle roadside joint, you'll be greeted by the mouthwatering aroma of freshly baked bagels in a wide variety of classic flavors. The most popular types of bagels here include sesame, poppy seed, cinnamon raisin, and blueberry.

But these bagels are not your average size—they're big and hearty, making them the perfect, extremely filling base for a sandwich. Absolute Bagels also offers a large selection of toppings and spreads, including lox, all types of cream cheese, chicken salad, roast beef, brie, and much more.

Additionally, at Absolute Bagels, they keep things old-school by only accepting cash payments, adding to the charming, one-of-a-kind atmosphere of this beloved bagel spot.

2. See a Show at Beacon Theatre

The Beacon Theatre has been entertaining audiences with concerts, plays, and other performances for over 90 years. Located on Broadway between 74th and 75th Streets, the Beacon Theatre is easily accessible by public transportation and is just a short walk from The Lucerne and many area restaurants.

The theater itself is beautifully ornate, with a grand lobby, intricate plasterwork, and a stunning ceiling. It can seat up to 2,894 people across three levels, and since the theater has a diverse lineup of shows, there's something for everyone.

You can catch concerts from old school classic rockers, the hottest pop artists, and cool indie bands, as well as some of the biggest names in stand up comedy. Some exciting upcoming performers include Jerry Seinfeld, Trevor Noah, and Bono.

Broadway Week is an opportunity to see some of the best shows on Broadway for two-for-one prices, making it perfect for date night or a fun outing with a friend. From January 17 to 23, you can save money on shows like The Book of Mormon, Chicago, Hamilton, and The Lion King, at some of the best theaters in the world.

These shows are super accessible—most of Broadway’s theaters are mere minutes away from The Lucerne via subway.

Keep in mind that Broadway Week only takes place twice a year. This means that if you miss it in January, you will need to wait until the summertime to take part in this great event.

Things to Do in February

The weather begins to warm up slightly in February, so it is a great month to visit the Upper West Side. From ice skating in Central Park to attending the New York Jewish Film Festival, there are many exciting things to do.

4. Catch Events and Lectures at the American Museum of Natural History

The American Museum of Natural History is one of the most fascinating places in the city, but it’s more than just a place to see exhibits. It's also a hub of educational and cultural events.

Besides impressive collections and holdings including one of the earliest complete hominid skeletons, a life sized replica of a blue whale, and a full mammoth skeleton, the museum also offers a variety of educational programs for children and families. These include workshops, lab classes, and other hands-on activities that allow visitors to learn about science and nature.

The museum is also home to an observatory, library, and the Big Bang Theater, which plays an immersive film about the history of the universe, as well as over 34 million plant, animal, rock, and artifact specimens.

If you're looking for something to do on a rainy day or just want to learn something new, this museum—the largest repository of natural history in the world—is a great place to visit.

5. Watch a Film at Lincoln Center

The Upper West Side is one of the city’s cultural hubs thanks in large part to institutions like Lincoln Center. This sprawling, world-class space, located at Broadway and 65th Street, offers renowned performances of music, dance, film, and theater throughout the year.

In the fall, Lincoln Center is also home to the annual New York Film Festival, a premier film festival that attracts filmmakers, actors, and industry professionals from around the globe.

However, you can still catch a film in one of their state-of-the-art theaters outside of the New York Film Festival, thanks to the Film at Lincoln Center organization. Currently, they are collaborating with the Jewish Museum to host the New York Jewish Film Festival, which focuses on films documenting the Jewish experience around the globe.

Other films on show include various countries’ entries to the Oscars, including Saint Omer (France), Corsage (Austria), and EO (Poland). Learn more about various films on show and buy tickets here.

One of New York City's most iconic winter attractions, the ice rink at Rockefeller Center is a must-visit. It is open from October to April, weather permitting. The beauty of the rink is its location, tucked against the elegant Rockefeller Plaza, as well as the feeling of New York City residents coming together.

It's a great place to skate, whether you're a beginner or an experienced skater. The rink is well-maintained and rental skates are available for those who don't have their own.

After you skate, you can enjoy a cup of hot cocoa or a meal at one of the many restaurants in the area, or do some shopping at the luxury stores nearby.

Things to Do in March

In March, the city comes alive, as the hopeful nature of spring begins to reinvigorate the area. Central Park is one of the best Upper West Side destinations to visit during this time. You can also visit the Empire State Building for breathtaking views of the city, or cheer on the runners at the NYC Half Marathon.

7. Join a Tour of Central Park

With its beautiful landscapes, iconic landmarks, and rich history, there's something for everyone in this beloved park, nestled into the heart of New York City. From The Ramble to the Central Park Zoo to the Jacqueline O. Kennedy Reservoir, you can spend an entire day wandering through the park.

Though it can be great to experience Central Park on your own, if you want a deeper introduction to the history and attractions of the park, consider signing up for a walking tour.

There are several tour companies that offer guided walks and bike rides through Central Park. We at The Lucerne have also created an extensive guide to the park’s best landmarks.

These tours are a great way to learn about the park's history, flora and fauna, and famous attractions.

On Sunday, March 19, the annual United Airlines NYC Half Marathon will take place. This event attracts runners (and supporters!) from across the world, so if you're a runner or a fan of the sport, this is a great event to attend on the Upper West Side.

The 13.1-mile journey begins in Brooklyn, goes over the Manhattan Bridge, heads north on the FDR Drive, zips through Times Square (only 1 of 2 times it is closed each year!), and finishes in Central Park.

The race is well-organized and features plenty of entertainment and support along the way. There are also shorter races, such as a 5K and a 1-mile fun run, for those who don't want to tackle the full distance. You can either sign up to participate yourself or head outside to cheer on some intrepid athletes this March.

9. Attend the Orchid Show at the NY Botanical Garden

Are you a fan of florals, especially orchids? The Orchid Show at the New York Botanical Garden is the event for you. Be prepared for a feast for the senses and a celebration of the beauty and diversity of these incredible flowers.

The Orchid Show features a stunning display of orchids from around the world, set against a backdrop of lush greenery and beautiful architectural elements.

The exhibit includes a wide range of orchids, from delicate miniatures to towering specimens. The Garden also offers lectures, workshops, and other events related to the celebration of orchids during the show.

With over 50 smaller gardens, and one million floral specimens, the New York Botanical Garden is a gorgeous place to visit. It is located in the Bronx, so it is not quite part of the Upper West Side, but it is nevertheless worth the visit.

Winter on the Upper West Side is the perfect time to take part in some of the neighborhood’s extensive cultural offerings, but we couldn’t list them all. Here are some honorary mentions of other must-see places in the area.

For a change of pace, head to Riverside Park to take in the stunning views of the Hudson River.

To explore the history and culture of New York, the New-York Historical Society—the city’s oldest museum—is a must-visit. The museum offers a wide range of exhibits and educational programs that explore the city's rich past.

Food lovers should visit Zabar's, located at the corner of Broadway and 80th, for a taste of classic New York delicatessen.

Columbus Circle, at the southwest corner of Central Park, is a great spot for shopping and dining and is also home to the American Folk Art Museum, which showcases a variety of folk art from around the world.

The elusive artist Banksy’s "Flower Thrower" mural can be found on the Upper West Side, on the corner of West 24th street and 7th Avenue, so check it out for a taste of this street artist’s famed work.

Looking for world-class accommodations in the Upper West Side? Stay at The Lucerne for easy access to the nine activities listed above. Check our availability here.