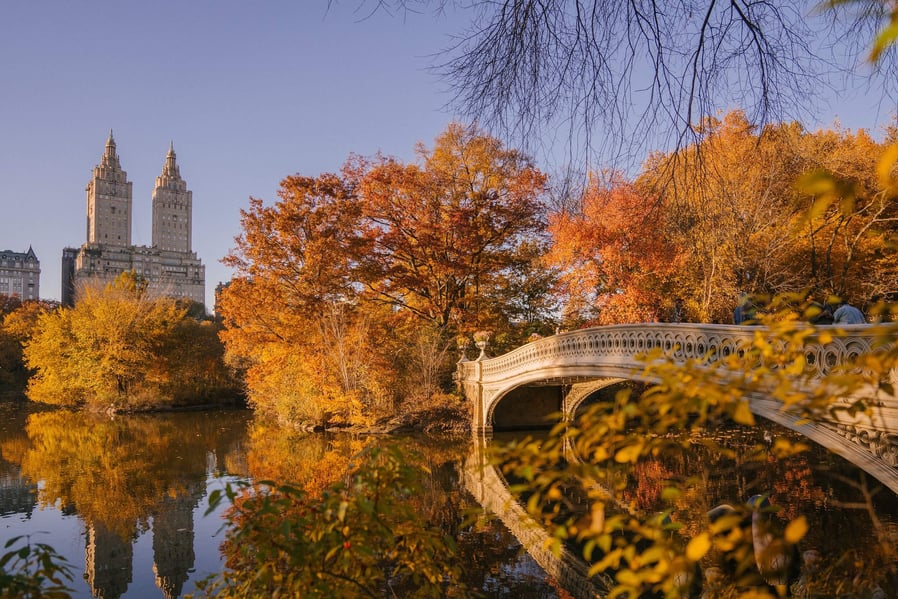 Central Park: 8 Things to Do This Weekend

The biggest perk of staying at a hotel on the Upper West Side is the proximity to Central Park. Arguably the most famous urban park in the country, Central Park has everything from bucolic meadows to elegant architecture to rustic paths.

Completed in 1876, Central Park covers 843 acres in the middle of the city, between the Upper West and Upper East Sides. It was designed by Calvert Vaux and Frederick Law Olmstead, who is considered to be the father of landscape architecture. The park is a popular destination for New York City tourists and locals alike; tens of millions of people visit every year.

Central Park is home to a nature sanctuary, a decommissioned reservoir, an open-air theater, a zoo, and much more. It is one of the most iconic locations in New York City, and it is a must-visit for any visitor to the city.

Continue reading for a list of the eight best things to do in Central Park.

Located on the stately Bethesda Terrace, the Bethesda Fountain is one of the largest fountains in the city. At its center stands Angel of the Waters, an eight-foot Neoclassical statue designed by Emma Stebbins, the first woman to receive a major art commission from New York City.

The two-level terrace overlooks Central Park’s Lake, and it is accented with grand staircases and romantic arches. Musicians often play live music in the area, taking advantage of the terrace’s tunnel acoustics. The fountain and its surrounding terrace are the perfect starting place for a day in Central Park.

2. Row through the Lake

The Lake in the middle of Central Park is gorgeous year-round, with calm, reflective waters and beautiful views on all sides. It is a 22-acre, man-made body of water, but its manufactured nature does not at all detract from the lush beauty of its surroundings. One of the best ways to enjoy the Lake is to traverse it on a rented rowboat; for $20 an hour, it is definitely worth it. Boats are available for rental at this calm oasis from April to November.

The Conservatory Garden is Central Park’s formal garden; it opened in 1937 with three distinct sections: the French North Garden, Italian Central Garden, and an English South Garden. It is known for its secluded nature and its fantastic floral displays. Tucked into the east side of the park, the magnificent horticultural designs of the Conservatory Garden are a must-see.

4. Grab a bite at Tavern on the Green

Located on the west side of Central Park, this iconic restaurant has almost a century of history. Since 1934, Tavern on the Green has boasted an incredible ambiance, classic American fare, and beautiful dining spaces. The restaurant has hosted many prominent figures, from Grace Kelly to John Lennon to various New York City mayors. Tavern on the Green serves brunch, lunch, and dinner, and dinner here is the perfect way to wrap up a day in Central Park before returning to a hotel on the Upper West Side.

A post shared by Tavern On The Green (@tavernonthegreen)

5. Bird-watch in the Ramble

This 38-acre woodland makes visitors feel like they have left New York City completely. Drawing inspiration from the lush forests of upstate New York, the landscape contains meandering trails, rocky outcrops, dense greenery, and lots of wildlife. It is the best place in Central Park to birdwatch, as there are over 230 species of bird found in the area. Birdwatching is incredible especially during migration season because the Ramble is a stop on the Atlantic Flyway migratory path. Even if you aren’t interested in birds, the Ramble is still a great place for an immersive stroll.

A 15-acre lawn built for relaxing, Sheep Meadow is the ideal place for a picnic or an afternoon nap. Its pastoral atmosphere used to be maintained by a flock of sheep, hence the name. The lawn, found in the southwestern section of Central Park, represents an idyllic retreat in the hustle and bustle of New York City.

Belvedere Castle is a mini complex perched on a rocky outcropping. Made mostly of stone, it appears to have risen naturally from the outcropping; it allows for sweeping views of the surrounding park. It is home to an observation deck, weather station, and exhibition rooms, as well as a Central Park gift shop. From the observation deck, you can see the Ramble, the Delacorte Theater, the Great Lawn, and more iconic views of the park.

An area of Central Park near West 85th Street was once home to a prosperous, majority Black community known as Seneca Village. In 1857, the land was razed to make way for Central Park, and the settlement was lost completely. In the last decade or so, archaeologists and historians have been researching the settlement and excavating the land upon which it once stood; now, visitors can read about this research at the site. Central Park also offers guided Seneca Village Tours that aim to teach people about the community’s history and people. Learning about Seneca Village is an important way to acknowledge the history of the land that Central Park now stands on.